Well-improved modification of MiG-21PF aircraft for installation of R-21F-300 engine with thrust of 7,200 kg. In 1960 during design phase the airplane had designation as MiG-23 since it was designed for S-23 armament complex. S-23 complex included: «Sapfir-1» radar with pulse radiation (at the second phase – «Sapfir-II» with quasicontinuous radiation), two K-23 missiles, ASP-PF sight, infra-red direction finder «Spektr». In 1961 the aircraft E-8 was designated as MiG-21M since TsD-30TP radar, infra-red sight «Samotsvet» and two K-13 missiles were installed on this aircraft because S-23 armament complex was not ready.

The main differences from MiG-21PF aircraft:

E-8/1 aircraft was manufactured on January 1962 and on 17 April it performed the maiden flight controlled by test pilot G.K.Mosolov. 25 flights were carried out on the aircraft basically on the program of power plant development and provision of stable operation of R-21F-300 engine. On 11 September the E-8/1 aircraft was crashed and destroyed. The cause of accident was disk destruction of the sixth stage of engine compressor with subsequent destruction of both hydraulic systems and fuel tank resulted in control loss and aircraft fire.
The E-8/2 aircraft was manufactured on May 1962 and on 22 June was handed over for factory flight tests. On 29 June the maiden flight was performed by test pilot A.V.Fedotov. 11 flights were carried out. After completion of the theme the E-8/2 aircraft was used to develop the future MiG-23. 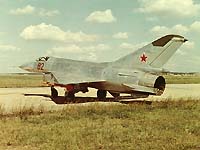 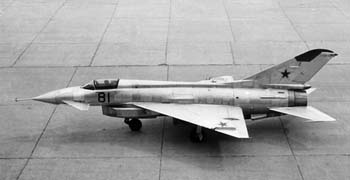