This was a single-seat multi-altitude tactical reconnaissance bomber commissioned for development on the basis of the MiG-25R recon/fighter by the Ministry of Aircraft Industry on 29 January, 1970. This aircraft was intended for photo and radio reconnaissance and bombing of ground targets with 500 kg bombs. 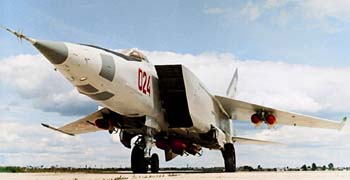 To serve the purpose, the aircraft was equipped with four under-fuselage stations for mounting four FAB-500M62 high explosive bombs. Later on, the bombload of the MiG-25RB was beefed up to 5,000 kg (four under-wing bombs and six underbelly bombs).
The MiG-25RB was also armed with custom-made heat-resistant versions of the FAB-500T bomb designed to withstand heavy thermodynamic heat loads they were subjected to during supersonic speed missions. An experimental model of this recon/bomber was derived from the E-155R4 fighter in February 1970 and designated E-155R4B.
Federal acceptance procedures were finished in December 1970 and in the same year the Gorky aircraft production plant started series
production of the aircraft. In 1972, some of the recon/bomber birds assembled at the plant were fitted with NAFA-75 night vision cameras and FOTAB-100-140 under-wing flash bombs, thus converting them into night photo-reconnaissance aircraft known as the MiG-25RBN. The decree of 18 December, 1972 by the Council of Ministers of the USSR commanded MiG-25RB recon-bomber (and its MiG-25RBK, MiG-25RBS and MiG-25RBV derivatives) for adoption with the Soviet Air Force. The aircraft remained in production until 1982 and a total of over 220 aircraft in various versions including export ones had been manufactured. 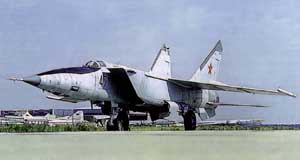