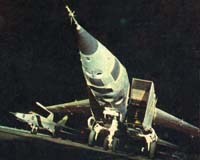 This is a single-seat supersonic reconnaissance bomber, a version of the MiG-25RB recon-bomber with the Kub-3M close-range ELINT station for surveillance and monitoring of the elaborate radio fields. The station had the capability to determine the type, function and location of hostile radio facilities, register the data acquired and downlink it to the ground facilities. An experimental model of this supersonic recon-bomber with the Kub-3M short-range ELINT station (MiG-25R #305) was assembled in summer 1970 and tested officially for production during 1971-1973. The MiG-25RBK was in mass production during 1973-1980. The export version featuring simpler fire control and guidance systems were sold to Algeria, Iraq, Libya, Syria, India and Bulgaria.

This is a single-seat supersonic reconnaissance bomber, a modified version of the MiG-25RBK with the more powerful Shar-25 short-range ELINT station. This aircraft was built in 1980 and tested officially in 1981. Earlier-developed MiG-25RBK recon-bombers were refitted in line with the same MiG-25RBF recon-bomber standard. 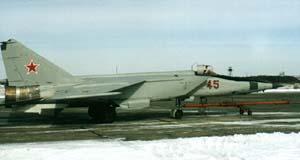 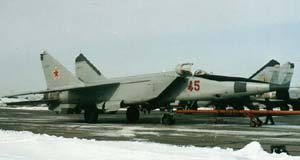