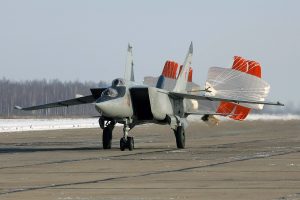 This is a twin-seat trainer version of the MiG-25R reconnaissance aircraft. Conceptually, design of the fuselage fore section and cockpit configuration in this trainer was similar to the double seat version of the MiG-25PU interceptor. The first trainer was built in 1970 and had remained under the full-scale production at the Gorky plant during 1970-1982 with the total of over 50 trainers having been assembled. 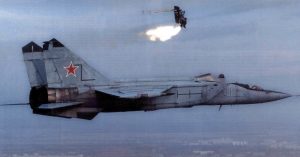 The flying laboratory was developed on the base of the production MiG-25RU for perfection of the crew rescue aides used in the Buran space shuttle programme and ejection seats for some other projects. The seat with a mannequin was ejected from the rear cockpit. To serve the purpose, canopy of the rear cockpit was replaced with the steel cone while the nose section of the aircraft held a small container with camera for ejection process recording.