This is a two-seat combat trainer derived from the
MiG-25P featuring an additional fore cockpit to seat the instructor. The fuselage’s fore section up to frame 1 was radically reconfigured. Introduction of the second cockpit ended up in removal of the radar followed by the removal of R-40R radar homing air-to-air missiles from the weapons suite while the R-40T heatseeker AAMs were retained. The plane was developed under the resolution of the commission of the USSR Council of Ministers of 7 July, 1965.
The preliminary design phase had been underway since 1967 until 1969. The first prototype was built in August 1969 having been derived from the series-made MiG-25P (reg. #405). The maiden flight was performed by test pilot A.V.Fedotov. The aircraft had been undergoing the official testing since September 1970 until July 1971. In 1970, the MiG-25PU was put to the series production at the Gorky-based aircraft production plant. It was produced until 1985 with the total of nearly 180 combat trainers having been built. During 1975-78, the MiG-25PU designated E-133 and flown by test pilot S.E.Savitskaya established four world speed and altitude records (female category).

In the early 1980s, the Gromov LII flight research institute derived from the MiG-25PU flying labs to hold research and tests under the Buran aerospaceplane programme.
To develop the flight director control software of the shuttle through the flight simulator complex, refine automatic flight control mode methods and train the crews, the MiG-25PU #4401 (tail number 02) and
MiG-25RBK #9210 (tail number 02) were converted into flying labs. The MiG-25PU #0578 (tail number 22) was turned into the MiG-25SOTN optical/TV surveillance aircraft intended to provide TV monitoring during the Buran’s flying to approach and landing. The aircraft had repeatedly accompanied the Buran’s analogue BTS-002 aircraft during the LII-held testing. On 15 November, 1988 test pilot M.O.Tolboyev and cameraman S.M.Zhadovsky flew the MiG-25SOTN accompanying the Buran shuttle during its automatic approach and landing following its first and last the only space mission. 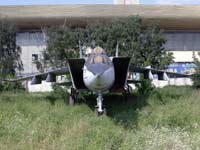 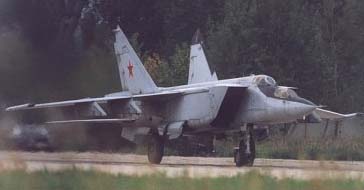