Tu-160PP – project of the director interceptor. The Tu-160PP was intended to be produced in a variant of the aircraft designed to organize a collective system of electronic counteraction of groups of strategic carriers, as well as for long-range interception of strike and transport aircraft of a probable enemy.
In the mid-1980s, the appearance and composition of the on-board equipment of prospective jamming aircraft Tu-22MP and Tu-160PP were determined.
Works on Tu-160PP aircraft were brought to the stage of production of in-kind layout. 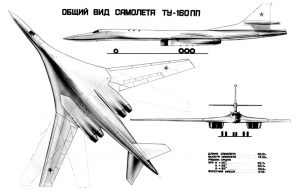