According to the resolution of the Council of Ministers of the USSR of May 24, 1968, the multipurpose Е-155М was created in three main versions: fighter-interceptor E-155MP as part of the aircraft all-altitude intercepting complex of aerial targets S-155M, front reconnaissance-bomber E-155MF and reconnaissance aircraft E-155MR.
The front attack rocket-bomber was E-155MF designed with RD36-41M engines and variable sweep wing. The machine was designed to target mobile and stationary (including small-sized) ground and surface objects, which were in the operational depth of front-line aircraft, to strike various stationary and area targets. Were not excluded fight against transport planes and helicopters by means of rockets of the class “air-air” with thermal heads of homing and also conducting passing radiation and air reconnaissance with photographing in simple meteoconditions, especially when flying at small heights. 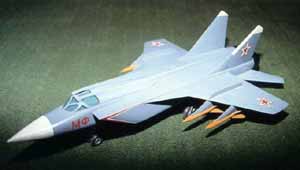 On the aircraft it was planned to install “Rys”(Lynx) targeting and navigation system, which is coupled with the SAU-155M automatic control system. Its radar allowed the detection of ground and surface targets from high and low altitudes, the targeting of guided missiles, including anti-radar missiles (Kh-58), and the dropping of bombs. In addition, when flying at low altitudes, the terrain and use of guns were allowed.
The E-155MF with fixed wing was very similar to the future MiG-31, except for the wide nose, where the crew cabin with the pilot and navigator sitting next to it was located. 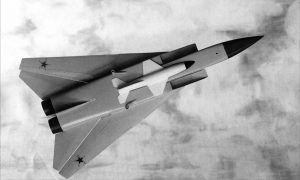 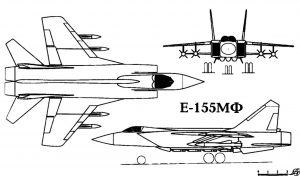 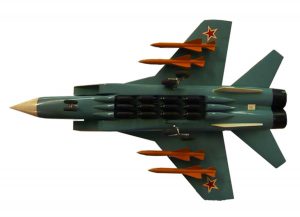