In 1966, in OKB-155 of the Moscow Machine-Building Plant “Zenith” began research on the creation of an aviation all-high-altitude С-155М interception complex, the basis of which was to be a single-mile fighter-interceptor E-155MP and a missile-bomber E-155MF with wings of variable sweep. In order to increase the margin of track stability, the use of additional (one or two) folding sub-body keels was considered. It was based on the interceptor project E-158 (1965).
According to the resolution of the Council of Ministers of the USSR of May 24, 1968, the E-155M was created in three main variants: E-155MP fighter interceptor, front bomber E-155MF and E-155MR scout plane.

For the first time in the world, the basis of the weapons control system of the “Zaslon” interceptor was to be made by the “Zaslon-1” (“Smerch-100M”) phased antenna array radar (FAR), which could provide detection of aerial targets of all types at significant ranges in the whole range of altitude and flight speeds, including low-altitude targets flying against the ground background.
It has been developed since 1968 by Instrumentation Research Institute for Tu-148. Spatial scanning of the beam in this radar was carried out electronically, which allowed to provide viewing of a wide body angle and to eliminate mechanical drives of the antenna with their low speed, to solve the problem of tracking and attack of a large number of targets without limitation on angles.
The basis of the aircraft armament was to be made up of long-range guided missiles K-33 (after commissioning – R-33) with ejection start of “air-to-air” class.
They were supplemented by medium-range self-guided missiles R-40T (subsequently R-40TD) from the thermal seeker, as well as near-combat missiles with infrared homing heads R-60.
As an additional weapon in 1968, the optical sight of the ASP-23 and the built-in double-barrel gun AO-9 (GSh-23), subsequently replaced by a six-barrel gun AO-19 (GSh-6-23), were considered. The possibility of suspension and containers of UPK-23, however, in G-load under the wing or instead of missiles K-33 was considered.
Turned on in structure of an arsenal of E-155MP also blocks of rockets S-5K, S-5M, ARS-70-80, ARS-240-300 and S-24, caliber from 57 to 240 mm, bombs and incendiary tanks on external pendants. 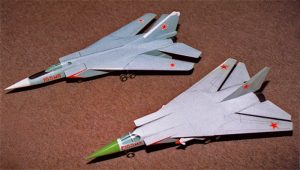 Guidance to aerial targets was supposed to be carried out using ground systems “Air-1M” and “Electron”.
In the design of the machine, the bet was made, in particular, on promising RD36-41M engines and ejection seats of the K-36.
The aircraft was to have air intakes similar to MiG-25 air intakes, but with improved aerodynamics. The crew of two was supposed to be placed tandem in the cockpit under a common lantern with up-and-back moving parts. There was also an option to accommodate side-by-side pilots.
The wing of the variable geometry and the one-wheel blade with the forkil aircraft was very similar to the MiG-23. For work from soil or ice airfields the main support of the chassis were going to equip with two-wheeled carts that would allow to reduce the specific pressure upon soil. 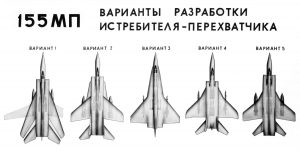 Avanproekt E-155MP (518-21) was prepared in 1968. The resolution provided for the deadline for presenting the aircraft for state joint tests in the 4th quarter of 1971, but further research on the topic revealed the need to revise the aircraft scheme: with the existing layout, the speed and practical ceiling of the interceptor were below the specified ones, and its design was too heavy.
In 1969, the development of a modified E-155MP project began (from 518-22). In 1971, it finally approved a scheme with a fixed trapezoidal wing, a conformal suspension of K-33 missiles under the fuselage and a double crew cabin (pilot and operator) according to the tandem scheme. As the power plant D-30F-6 engines of a design of the Perm MKB (the chief designer P.A. Solovyov) were chosen.

Another project, “518-55”, was very similar to the future implemented MiG-31.
The aircraft was to carry four Р-33 missiles under the fuselage, had a two-wheeled main landing gear trolley with tandem arrangement of wheels. The trapezoidal wing was intended to be made with large root straps and a bent trailing edge. Works on “518-55 article” did not advance beyond sketch design.
One of the new demands placed on the interceptor was the possibility of semi-autonomous combat operations in the absence of a complete air defense radar field in the far North and Far East of the country. Taking into account the new requirements led in 1972 to the development of a sketch design of the fighter-interceptor E-155MP (type 83). 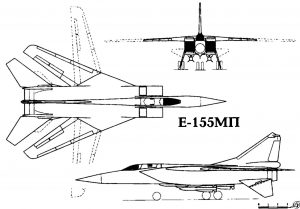