Fighter fitted out with combined powerplant 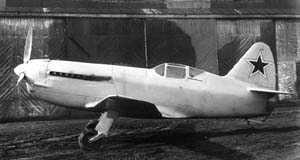 Development of experimental fighter fitted out with combined powerplant began in accordance with the State Defence Committee resolution dated May 22, 1944. The first aircraft prototype, designated as I-250, was presented for flight tests in February 1945. Test pilot A.P.Deev and leading engineer V.N.Sorokin were nominated responsible for flight tests.
I-250 combined powerplant consisted of VK-107A engine rated at 1650 hp and VRDK booster developed in TSIAM under K.V.Kholshchevnikov. Power produced by piston engine supplied propeller and VRDK compressor.
Armament consisted of three B-20, 20 mm-cal. cannon (100 shells for each cannon). 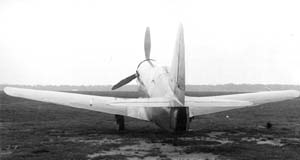 The I-250 aircraft made the first flight on March 3, 1945. However, the first I-250 prototype crashed having performed scheduled test flight; test pilot A.P.Deev died. The horizontal stabilizer was broken by excessive g-load. Pilot escaped the aircraft at the low altitude, parachute canopy was deployed to late, and pilot’s falling was not braked.
The second I-250 prototype was presented for production tests in May 1945. After the first prototype crash, the horizontal stabilizer was strengthened and the fin area was substantially increased to improve aircraft directional stability at high speed. The Flight Research Institute test pilot A.P.Yakimov and the Mikoyan Design bureau pilots A.N.Chernoburov and I.T.Ivashchenko participated later in flight tests. During the tests the maximum speed of 825 km/hour was attained which exceeded by 100-150 km/hour speed of previous fighters. VRDK selection at the take-off reduced run distance to 400 m. In accordance with the Government resolution, preparation for production of small I-250 aircraft series began at the plant No 381 in summer 1945 in parallel with flight tests. 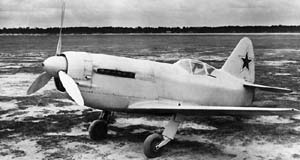 The I-250 aircraft production tests were completed by late 1945. However, the aircraft was not delivered for the State tests, since the State ground tests of powerplant were not conducted yet. Besides, engine was replaced more than once during first half-year 1946. On July 12, the upper cover of VK-107 engine block was burnt in flight, the aircraft made a forced landing at the airfield Lubertsy and was damaged. It was decided not to repair the prototype since the plant No 381 produced a number of standard I-250 fighters. The aircraft powerplant with service life of 35 hours passed the State tests in GK NII VVS in May 1947. 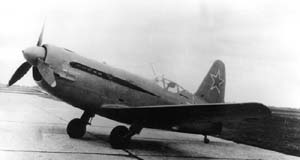 Standard I-250 No3810102 aircraft built in December 1946 was delivered for the State tests on September 19, 1947. Unlike prototypes, its fuel reserve loaded to four wing tanks was increased by 190 kg. Tests were conducted from October 9, 1947, to April 3, 1948 in the Navy Research Institute for Aviation at the “Skulte” airfield (Riga). The aircraft was flown by this institute pilot I.M.Sukhomlin during the tests. Flight tests and final development of the I-250 aircraft powerplant were directed by TSIAM leading engineer A.V.Komissarov. The I-250 aircraft powerplant and VRDK booster worked without failures during the tests. Process of final development and I-250 flight operation allowed to gain experience that was used later for design of turbojets.
Eight I-250 aircraft, designated as MiG-13, were built at the plant No 381 in 1946. These aircraft were delivered for service trials. However, in early 1948 they were taken out of service since MiG-9 and Yak-15 aircraft powered by turbojets appeared by that time. 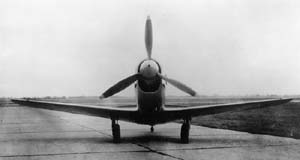 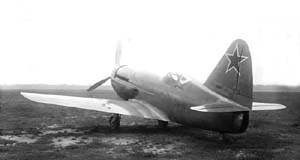 Design all-metal. The sizes of an airplane small, wing area only 15,0 м2, it of a thin section, with special aerodynamic layout.
I-250 combined powerplant consisted of VK-107A engine rated at 1650 hp and VRDK booster developed in TSIAM under K.V.Kholshchevnikov.
Power produced by piston engine supplied propeller and VRDK compressor. 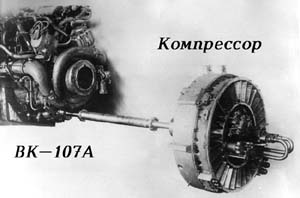 During take-off and in flight with VRDK off, power was used mainly by propeller; VRDK compressor was rotating at the lowest gear ratio. In order to reduce take-off run and attain maximum speed, the second, highest gear ratio was selected and combustion chamber has been supplied by fuel.
The combustion chamber – about family by injectors behind a cabin, output gas nozzle – with adjustable lateral doors. The common power of a piston engine and VDRK was 2800 h.p. at the altitude 7000 m at speed of 820 km/h. Three-blade AV-10P-60 propeller, 3.1 m in diameter, was used on the aircraft.
Armament consisted of three B-20, 20 mm-cal. cannon (100 shells for each cannon). One cannon shot through a hollow gear shaft; two synchronous cannon were mounted at the fuselage sides.
Unlike prototypes I-250, MiG-13’s fuel reserve loaded to four wing tanks was increased by 190 kg.
The range without actuation VDRK on speed of 600 km/h has increased up to 1818 km. 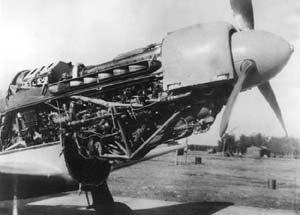