This missile destined for destruction of radar targets was the first Soviet strategic winged missile launched from aircraft.

March 11, 1954 there was a Decision Council of Ministers of the USSR about development of a complex K-20 in a structure of an airplane Tu-95K and cruise missiles Kh-20. In figure 20 in the name the complex is obliged Tu-20 – under such name was originally planned to introduce into the inventory a bomber «95».
The development of a rocket Kh-20 was conducted in OKB-155-1 (Dubna) under a management M.I.Gurevich. A control system developed KB-1 under a management V.M.Shabanov.
Externally rocket Kh-20 was similar to a fighter an MiG-19. An aerodynamic configuration normal aircraft. On a rocket the turbojet engine was established AL-7FK.
For guidance it uses a preprogrammed autopilot for launch and climb, an autopilot with command guidance for mid-course flight, and a preprogrammed dive to target. It has a CEP of 150 ft when used in an anti-ship role and a CEP of 1 to 3 nm when used against land targets.
Three prototypes were built in 1957: Kh-20/1 missile was presented for tests on January 9,1957, Kh20/2 – on August 5, 1957 and Kh20/3 – on December 1957 (in addition, 17 missiles were built at the plant No 256, including eight Kh-20M). The first launch was made on March 17, 1958. 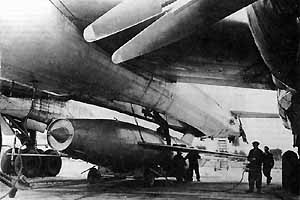 By 1959 for Х-20 the new thermonuclear charge was developed, and some changes are brought in to a design of a rocket. The new modification has received an index Х-20М. The altitude of flight Х-20М was lead up to 20 km. The missile went into serial production in 1960.
The M-20 target was developed on the basis of Kh-20 missile. Research on using of the Kh-20M engine thrust for aircraft- carrier manoeuvring was conducted in 1963.
One AS-3 (Kh-20) is carried aboard the Bear B and Bear C (Tu-95K, Tu-95KM and Tu-95KD) aircraft. Production terminated in 1965.
Increase of operating range of the American interceptors and the introduction in a formation anti-aircraft missiles «Bomark» with operating range of 420 km, and then «Super Bomark» with operating range of 710 km sharply has reduced probability of the approach to the purpose of a missile carrier Tu-95. Simultaneously in USSR have begun to go into service intercontinental ballistic missiles R-7A, R-9, R-16 etc. It is interesting, that the cost made Tu-95K with a rocket Kh-20M 40% of the cost of the most expensive rocket R-7A. 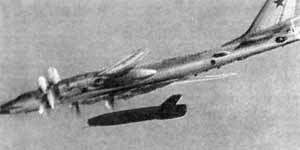