In 1958, Hughes started to develop the AN/ASG-18 fire-control system (FCS) for the forthcoming North American F-108 Rapier long-range Mach 3+ interceptor. The missile component of the system was to be a large derivative of the AIM-4 Falcon missile family, designated GAR-9, which was to have a range of more than 160 km (100 miles). The large radar of the AN/ASG-18 was to provide target illumination for the semi-active radar mid-course guidance. For terminal homing, the GAR-9 was equipped with an infrared seeker. The GAR-9 was powered by a storable liquid-fuel rocket motor, and for some time, a low-yield nuclear W-42 warhead was envisioned, but eventually a conventional HE warhead was used.

For improvement of the FCS the flying laboratory bomber Convair B-58 Hustler (factory number 55-665) was used.
When the F-108 was cancelled in 1959, the USAF looked for a replacement and found the Lockheed А-12 “Blackbird” reconnaissance plane. It was decided to developed an interceptor derivative, designated YF-12A, which would use the AN/ASG-18 FCS and the GAR-9 missile. In 1963 the XGAR-9 prototype missile was redesignated XAIM-47A, and in the same year, flight tests of the YF-12A and the XAIM-47A began. During the test program, several successful long-range intercepts of target drones were performed. In 1966 the planned F-12B production interceptor was cancelled, which also meant the cancellation of the AIM-47A production missile. About 80 XAIM-47A’s had been built, and some of the technology was used by Hughes to develop the AIM-54 Phoenix long-range air-to-air missile for the U.S. Navy.
An air-to-ground derivative of the AIM-47 was briefly evaluated as the XAGM-76A. 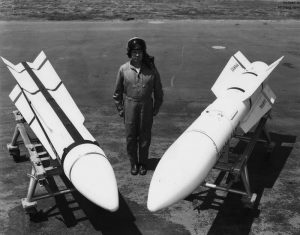