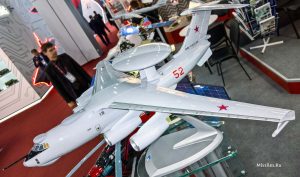 The Beriev A-100 is a airborne early warning and control (AEW&C) aircraft based on the Il-76MD-90A transport aircraft. Avionics and configuration will be similar to the A-50U, but with a new Vega Premier Active Phased Array Radar.
In accordance with the Decree of the President of Russia of April 28, 2004, the development of the draft complex is carried out by TANTK named after G.M.Beriev together with the NGO Vega-M. The Vega concern carries out ROC «Premier» according to Government contract No. 63017 of 08.06.2006.
In 2013, during the work of the Commission of the Ministry of Defense, it was decided to replace the А-50 carrier aircraft with an aircraft based on Il-76MD-90A and approved the TTZ with a new ROC «Premier-476», executed in accordance with State Contract No. N/4/2-13-DOGOZ of 09.12.2013 with a deadline of completion in November 2017.

The new Vega Premier AESA radar in the dome will have electronic steering in elevation while azimuth is controlled by the rotation of the dome. The array will rotate once every 5 seconds, thus improving the radar’s ability to track fast moving targets.
RTC «Premier» solves the following tasks: 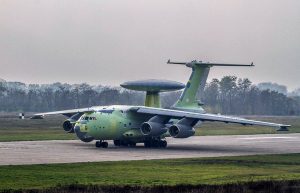 On November 21, 2014, the first serial Il-76MD-90A was transferred to Taganrog Aircraft Factory for installation of the equipment complex and testing of the first copy of the A-100.
On October 26, 2016 in Taganrog took place the first flight of the aircraft-flying laboratory A-100LL within the framework of ROC «Premier-476», made on the basis of the converted А-50. (Aircraft number “52 red,” serial number 69-05) and intended for ground and flight tests of certain elements of perspective radio engineering complex IBRTC, check of electromagnetic compatibility of systems included in it, development of protocols and modes of information exchange and other design purposes. On April 24, 2017, the first flight of A-100LL with the radio engineering complex turned on took place.
On November 18, 2017, the first flight of the multifunctional aircraft radar watch and guidance A-100 took place. During the first flight aerodynamic characteristics of the aircraft, operability of avionics and parts of target equipment of RTC (radio engineering complex) were checked.
On February 9, 2019, according to the Russian Ministry of Defense, the aircraft made its first flight on a new stage of testing – the “program of preliminary flight tests”. It may be about the beginning of flight and design tests, which are performed by the Aircraft Designer on the basis of the Customer. During this stage, the Developer confirms the characteristics of the complex before they are tested by the Customer’s testing institution – the 929th Chkalova GLTC.
Completion of GI of the complex is planned for the end of 2020.
If adopted and put into serial production, the aircraft will А-100 complement the aircraft with A-50 and A-50U rather than replace them. 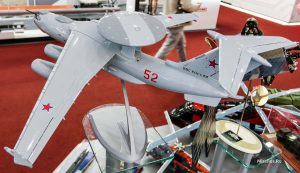 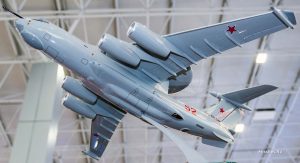 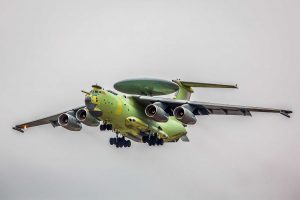 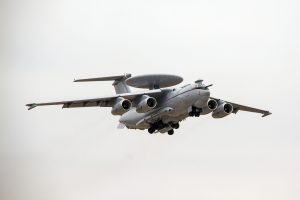