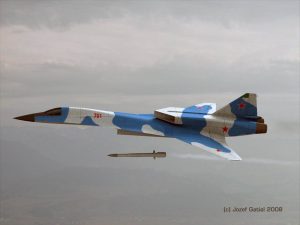 In 80s, approximately in one time with the beginning of development in OKB MiG of the project MFI (1.42) the activity above the project «MDP» (Multifunctional Distant Interceptor) for replacement of an interceptor an MiG-31 was begun. Later MDP became known as a product 7.01. As well as at its predecessor, a problem MDP should become patrolling and guards of extended borders USSR from a high share of a self-sufficiency. Thus it was supposed to make a sizeable step from an MiG-31 in performance of this air complex.
Aerodynamic configuration – single-fin duck with a double delta wing and canard wing. Accommodation of arms internal.
The activities on an airplane were considerably slowed in 90 years and the project was finally closed in 1993, without construction of the prototype. It is supposed to keep the modernized versions an MiG-31 in formation till 2025, when they will be replaced by PAC DA. Detail of the project till now remain unknown.
In 1993 in attempt to keep the project the version 7.01P – supersonic intercontinental airplane of a business-class was studied. 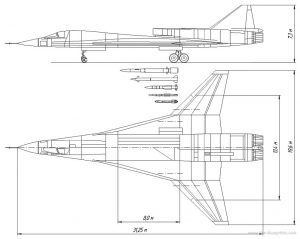