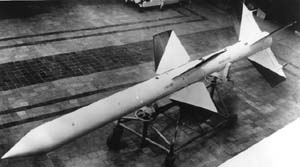 Following versions of the K-9 rocket were prepared for flight tests:
– rocket armed with warhead (item 90);
– ballistic rocket (item 91) destined to assess aerodynamic and ballistic characteristics of the rocket with fixed wing in flight, to check safe rocket separation from aircraft and to determine engine characteristics;
– rocket controlled by a program (item 92) destined to assess aerodynamic and ballistic characteristics of the rocket controlled by a program in flight, as well as to check autopilot, power unit and pneumatic system in flight;
– rocket equipped with telemetry system (item 93) destined to assess closed loop (aircraft-rocket-target) performance of the rocket, fitted out with a warhead and radio fuse, in flight close to the target without warhead explosion.
26 rockets were produced in 1961 (item 90 – 3 rockets, item 91 – 6 rockets, item 92 – 11 rockets, item 93 – 6 rockets). Three K-9 firing were made in early 1961, using a launcher mounted on a ground test rig. Ten K-9 rocket launches (5 – item 91 and 5- item 92) were made from the E-152A aircraft during the flight tests in 1961. Test results confirmed compliance of the rocket aerodynamic and ballistic characteristics with estimated ones. Warhead ground tests at GSKB-47 test range, bench tests of rocket systems, mathematics simulation and modelling of all rocket flight modes, rocket operational efficiency calculation, made by NII-2, and other tests and checks were carried out. 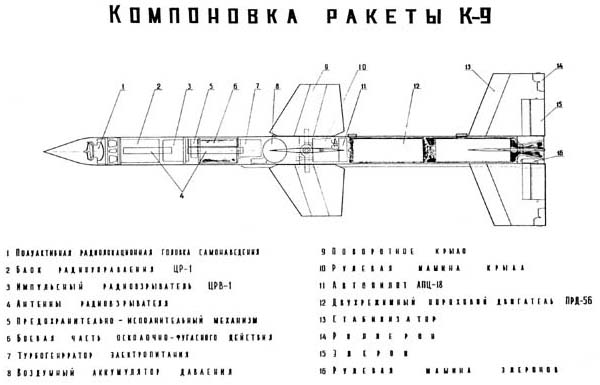