Development of the E-155R high-altitude supersonic tactical reconnaissance aircraft was authorised by the same USSR Council of Ministers decree of 5 February, 1962 which defined development of the E-155P interceptor, and thus the E-155R fighter was considered a modified version of the above interceptor. One of the major design distinctions between the interceptor and reconnaissance aircraft was reconfiguration of the latter’s fuselage nose section. The radar which used to be stationed in the nose was replaced by surveillance equipment. The second distinctive feature was 1,200 litre drop tanks fitted with vertical fins intended to increase directional stability and reduce rolling stability which were installed at the wingtips. The skeleton of the surveillance equipment was to be AFA-70 (AFA-70M), AFA-72 and AFA A-E/10 cameras installed in the detachable hatches in the fore section of the fuselage and Romb-4A general purpose radio surveillance system. The use of some other equipment was a possibility.

Unlike the interceptor, the reconnaissance aircraft was to be outfitted with the Peleng integrated navigation system which for the first time included inertial navigation system with a digital computer and an adjustment data input link from the Doppler navigator. For self-protection the recon aircraft was accommodated with the integral Siren-1F active ECM system. In 1962-1963, at the experimental production facility of the Design Bureau #155, two experimental aircraft – E-155R1 and E-155R2- were laid down. Assembly of the E-155R1 was accomplished by late 1963 (earlier than E-155P) and by December 25 the same year it was moved to the design bureau’s Flight Test Institute in Zhukovsky, Moscow region. The maiden flight of the E-155R1 (reg. # 1155) was carried out on 6 March,
1964 by A.Fedotov, Mikoyan’s test pilot. On that time the aircraft did not carry any surveillance or other relevant equipment (instead of the real equipment mockups of the same size and weight were substituted), basically this version was intended to establish the flight performance, including stability and controllability, of the new aircraft and in-flight evaluation of the power plant and avionics. The flight tests were concluded by late 1965. This very year the aircraft scored its first world record: on 16 March, 1965, the E-155R1 with two-tonne load aboard and piloted by A. Fedotov, in 1000 km-long test run reached 2,319 km/h speed (the record was registered when flying without load and with 1 and 2 ton cargo).
In the report submitted to the FAI (Federation Aviation International) this aircraft was designated as E-266 while its power plant was given R-266 designation. Since then, in all official protocols and files of the FAI other experimental aircraft-world record holders of the E-155 series (namely, E-155P1 and E-155R3) were known under the similar coding.

The second experimental model of the reconnaissance aircraft built by late 1964 and delivered to the test facility for flight tests in March 1965, was intended for optimisation of cameras, comms and other equipment as well as establishment of the flight performances and capabilities.
In order to expand the test programme, in 1966 the Gorky aircraft plant built the third model of the E-155 series – E-155R3 reconnaissance fighter (reg. # 3155) – that boasted a number of design innovations. These design improvements included: increased area for the vertical control surfaces, installation of the fuel tanks in the tail section (concept of the finned suspended tanks on the wingtips was abandoned), reinforcement of the aft fuselage, extension of the nose section of the fuselage, alterations in leading edge of the wing, installation of the under-wing pylons for flash bombs (for night-time photography), arrangement of extra hatches for installation of new cameras, perfection of the fuel supply system, etc. All the above improvement had to result in extension of the flight range and increase in flight speed. Assembly work in the Gorky aircraft plant was completed in late 1966 and the maiden flight of the aircraft took place in March 30, 1967. In the same year the aircraft participated in the Air Parade in Domodedovo, Moscow region, and set several speed records: on 5 October, in the 500 km leg M. Komarov sped the aircraft up to 2982 km/h; on 27 October P. Ostapenko achieved 2,921 km/h speed in the 1,000 km long run with one- and two-tonne load aboard. Having shown such results, the aircraft outperformed the records of its US counterparts by 200 – 300 km/h. 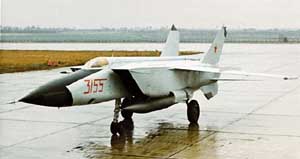 Later in 1973, A.Fedotov, B.Orlov and P.Ostapenko piloting the E-155R3 aircraft, established seven more world records in speed, altitude and climb rate. In May 1968, at the Gorky plant the fourth E-155R series aircraft, the E-155R, was built.
This one was used for optimizing of the Peleng-1D navigation system. Until then, navigation systems were tested only in the flying laboratory based on the Tu-104 #1303 airliner. During October 1965 – October 1968 experimental E-155R2, E-155R3 and E-155R4 aircraft participated in the federal test and acceptance program. In 1968, the Gorky plant commenced a full-scale production of the reconnaissance aircraft which on orders from the Ministry of Aircraft Industry was designated MiG-25R.
Unfortunately, series production of the aircraft never reached full swing, since the 25 March, 1965 Decree of the Council of Ministers tasked Mikoyan with the creation of E-155R derivatives boasting more advanced ELINT systems, namely, comprehensive ELINT systems, side-looking radars and more powerful general purpose ELINT systems. In 1970, the recon bird was upgraded to the MiG-25RB reconnaissance bomber standard capable not only of reconnaissance and surveillance missions but of high-altitude bombing of ground targets as well. Certain models of the MiG-25RB series featuring new avionics and equipment known as the MiG-25RBK, MiG-25RBS and MiG-25RBV turned out to be the main and most produced aircraft of the family.